Madonna of this work is

Following Takashi SHIMURA of the previous work, one of "Seven Samurai" appeared.

Mr. MIYAGUCHI is the same as "Seven Samurai" in terms of kimono figure, but the weapon has changed from sword to pen, and this time he is playing a solitary novelist.

In terms of the connection that "it is appearing in both movies", there are others Mr. Toshiro MIFUNE and Eijiro TONO.

Mis. Sayuri YOSHINAGA doesn't have to explain it now.

She is a big actress representing Japan.

It was director Katsumi NISHIKAWA, who discovered her before her movie debut.

The circumstances at the time are written in his book "Katsumi NISHIKAWA Movie Training", so let me introduce it here. 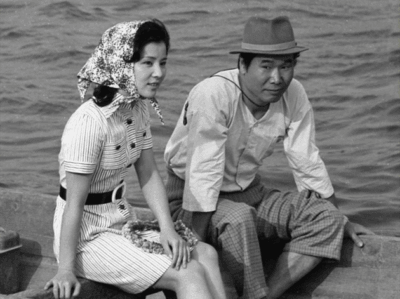 At one time in the acting department, when I was watching the album of exclusive actors, there was a girl that was added to the album at the very end.

Who is she? I heard, there was an advertising director named ISHIGAMI, and he and

Sayuri YOSHINAGA's father were in sync with the Tokyo University era.

I heard that she was entering this time in such a relationship.

I heard that she used to appear in the TV program "Suzunosuke Akado" before.

If I told him to call this child once, no, this girl is still fifteen years old, and he said that she is a petite girl.

One time she came, it was, indeed, a little girl.

It was an impression that it was smaller than I expected.

But, I thought she was nice at that time.

Although the screenplay was also completed, I took down Mayumi SHIMIZU and told the company to select Sayuri YOSHINAGA.

My claim became a big problem in the company, and this is a problem related to the authority of the director of the actor, so I made a lot of trouble.

But lastly the producer was in tune with me, so I forced her to take the shot.

This problem had a lasting effect.

Because there were such internal circumstances, the members of the production staff seemed to treat her harshly.

Next, I will quote from Mis. Sayuri's book "Just chasing dreams."

"This role was decided by Mis. M. Even though the costume match is already over, why the hell did it become such a thing?"

One staff said that to Mis. Sayuri, she gave a costume as if she could throw it.

Director NISHIKAWA wanted to make a film debut of Sayuri YOSHINAGA as soon as he could think that noisy wave would build inside the company, but that action, on the contrary, caused Mr. Sayuri a hard feeling.

By the way, this "Gale boy" isn't even on sale video.

It seems to be very wasteful.

I'd like them to sell it or distribute it online.

Mr. NISHIKAWA talks about how great the existence of Sayuri YOSHINAGA was in Japan.

On this occasion, I will quote that part as well.

However, Sayuri YOSHINAGA was born at the end of World War II.

So, it is a generation that has no shadow of the end battle or anything like that.

It seems that she embodies it.

So old people clapped greatly, saying that young people in the future should be like her.

Sayuri YOSHINAGA has elements like the sun that appeared from the dark.

I think that's the critical point.

Jiro OSARAGI(※ novelist) was a difficult person, but if I bring Sayuri YOSHINAGA, everyone is a smiling face.

When I go alone and only want to change the last part of the script, it is said that it is useless, even when taking Sayuri, everyone got a smile, and most requests pass this way (hehehe).

Therefore, when something goes wrong, I will bring Sayuri and solve it.

There are people called modern Sayurist(※ a huge fan of Sayuri YOSHINAGA) like TAMORI(※ a TV personality), but there is a period of essential Sayurist who is not such a light feeling.

I feel that the world has welcomed Sayuri YOSHINAGA in their absolute support.

Looking at this work based on the view of NISHIKAWA, there is a deep emotion.

On the Edogawa River, Tora-san and Genko and Utako being played by

Sayuri YOSHINAGA are taking a walk.

She gets a crown of clover overhead and smiles shyly.

She is precisely the "goddess of the sun."

Of course, she is a person who suits the crown decorated with jewels, but the audience wants to see is not a royal queen who is unable to approach, but a folksy princess who puts on the head a crown knitted with white clover blooming on the river, it will be Sayuri YOSHINAGA.

It is director Yoji YAMADA who draws out the feeling of the audience and shows it into a firm shape.

And in another scene in this movie, he used Johann Strauss 'Spring Voice'.

And if it comes to movie fans, anyone will associate "2001: A Space Odyssey" directed by

As director Yoji YAMADA is making this work, I can't imagine that he didn't watch "2001: A Space Odyssey."

And those who have watched that movie will never forget,

We can't forget the combination of these images and music.

I think that it is good to assert that no film director doesn't feel anything in this devastating combination.

Then, I think that it was "reply" to Mr. Kubrick from Mr. YAMADA who dared to use the same music for "Tora-san movie" 3 years after "Kubrick movie."

In contrast to these,

Tiger and Tora chilling together"

It was probably the ism of Mr. YAMADA who used the same Strauss' s music to dare to create a different world.

Watching from the scale of the vast universe, sticks to the surface of the earth like a bean, cries and anger in a casual word, worries about whether the swallow will come again next year, we may be far away from Starchild, who lives beyond Jupiter, and it may be a genuinely incompetent existence.

But it seems that director Yoji YAMADA continues to teach us that trivial things in everyday life are irreplaceable.

For Mr. YAMADA and Mr. Kiyoshi ATSUMI too, there was a different feeling from welcoming Mis.

So, let's quote one from another book as well.

(Yoji YAMADA) Mis. Sayuri YOSHINAGA was a big star from the time before "Tora-san movie" started.

Someday, the expectation that Sayuri YOSHINAGA might also appear in "Tora-san movie" was from the beginning of this series.

(Interviewer) Surely Madonna until then was rather low-key actresses.

Everyone is a wonderful actress, but it isn't a big star in name value.

Therefore, when making "Tora-san's Dear Old Home", my heart was excited a few, "At last Mis. Sayuri YOSHINAGA is going to appear." (Interviewer)

Sayuri YOSHINAGA's appointment was realized because the momentum of the eighth work was terrific.

(Yoji YAMADA) I was talking to the staff when I was writing a screenplay for “Tora-san's Love Call” of the eighth work.

"If we were to make the ninth film, will we finally have it appear in Mis.Sayuri YOSHINAGA?"

Then Mr. ATSUMI says "Since Mis. Sayuri probably has appeared on the program of Nippon Television, from now on we will go there and ask."

That was very impressive.

Mr. ATSUMI never said such a thing either later or after.

He had never intruded.

He didn't intervene in the script, and he never said, "How about this story?"

(It was only once at that time that he joined in talking about casting), so I remember it vividly.

Moreover, he didn't tell it from the way, after we said that "Sayuri-chan is good."

I felt that Mr. ATSUMI is now on a roll.

Like him, we at that time were thinking until the next casting......

It can be said that the entire staff was on a roll.

Rather than a review, this time it seems like an essay on Mis. Sayuri YOSHINAGA and Mr. Yoji YAMADA, and I'm sorry that can't introduce the outline.

The content of the movie is, of course, excellent.

It is also related to the fact that Mr. Shin MORIKAWA who was playing the role of Tora's uncle after the previous work departed to heaven, this work emphasized laughter very much, it became a high comedy work I think.

Even in that sense, we truly appreciate that the existence of Mis. Sayuri YOSHINAGA with elements like the sun is in the Japanese film industry.

This DVD is Region 2.

Some countries may not be able to play.Subtitle = Japanese / English